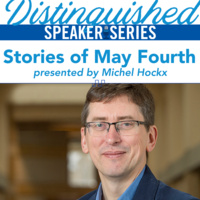 STORIES OF MAY FOURTH

The standard narrative of the May Fourth Movement holds that students in Beijing were moved to demonstrate on May 4, 1919, because of the impending signing of the Treaty of Versailles, which would transfer German concessions in Shandong province, especially in and around Qingdao, to Japan. The slogan huan wo Qingdao (“give us back our Qingdao”) was one of the most famous slogans of the Movement. The standard narrative also tells us that the May Fourth Movement was successful because, after a month of demonstrations and boycotts, in June 1919, the Chinese delegation at the Paris Peace Conference refused to sign the Treaty.

However, the standard narrative does not tell us what not signing the Treaty meant for the status of Shandong. The “Shandong Question” appears ultimately irrelevant to the historical account of the May Fourth Movement. The main outcome of the May Fourth Movement is national solidarity and a national challenge to the imperialist powers. In that larger process, Shandong was initially a catalyst, but eventually insignificant.

In this lecture, archival materials are discussed alongside scholarly narratives from Europe, the PRC, and the USA in order to reconstruct the process by which Shandong was restored to Chinese sovereignty and to try and understand why the diplomatic solution to the Shandong Question has failed to make an impact on the May Fourth master narrative.


About the speaker:
Michel Hockx is Professor of Chinese Literature and Director of the Liu Institute for Asia and Asian Studies at the University of Notre Dame. His research focuses on modern and contemporary Chinese literary and cultural communities, their publications, their values, their relationship to the state, and their representation in history. His most recent book publications are Women and the Periodical Press in China’s Long Twentieth Century (co-edited with Joan Judge and Barbara Mittler, Cambridge UP, 2018) and Internet Literature in China (monograph, Columbia UP, 2015).