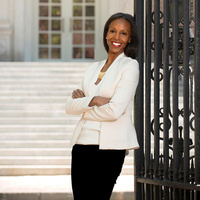 Racial bias is so deeply engrained in photography that it is actually embedded in the chemical makeup of color film, specifically calibrated for Caucasian skin tones.

Harvard University professor Sarah Lewis examines the role of the visual arts in shaping dialogues on vision and justice in her teaching and extensive publications. “My work looks at how the right to be recognized justly in a democracy has been tied to the impact of images and representation in the public realm,” she says.

Lewis is the best-selling author of The Rise: Creativity, the Gift of Failure, and the Search for Mastery (2014) and is the editor of Aperture’s 2016 issue on Vision & Justice, which received the Infinity Award from the International Center of Photography.

She has served on President Barack Obama’s Arts Policy Committee and held curatorial positions at the Tate Modern in London and the Museum of Modern Art in New York.  She serves on the board of Creative Time and the Andy Warhol Foundation of the Visual Arts.

Her forthcoming book on Frederick Douglass examines his strategy of becoming the most photographed man in nineteenth-century America to combat negative portrayals of African Americans.